KOLACH is the traditional Ukrainian Christmas Eve supper centerpiece.  Three braided loaves, which commemorate the Trinity, are stacked one on top of the other.  A candle is set in the middle of the top loaf to symbolize Christ, the “Light of the World”.   Its round shape gives it its name - “kolo”, a circle - symbolizing eternity.  An old custom was the communal sharing of bread, honey and salt.  Starting with the oldest member of the family, small pieces of Kolach dipped in honey and salt were offered with the greeting “Chrestos razdayetsia or rodyvsia” (“Christ is born”); they would response, “Slavitey Yeho” (“Glorify Him”). 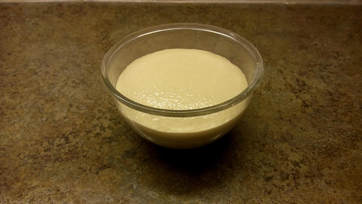 
TIP:   Need warm place to rise dough?
* Warm your oven at the lowest setting, then immediately turn oven off.  Cover dough with a moistened dish towel and place in oven to rise.  Careful too much heat will kill yeast.  Leave oven door slightly ajar.  Placing a small bowl of hot water in the oven also helps.
Place on floured board.  Punch down again (and knead in about 1/3 cup raisins (optional).
Divide into six equal portions.  Roll, with palm of hands, into six long 26" strips.
​
Twist together two strips - starting at center and working outward.  Repeat twice - resulting in three twisted strips.  Now entwine two of the three twisted strips - starting at center and working outward.

Grease 9" tube pan or a 10" round spring form pan with a small greased can (e.g. empty tomato paste can) placed in the center.  After it is baked, a candle will be inserted in the opening.
Place dough in pan and join neatly in a circle leaving a 1"space around the outside.
Wrap remaining twisted strip around outside of dough in the 1" space.  Join ends.
Cover with a moistened dish towel.  Set aside to rise in a **warm place until almost doubled in bulk (approx. 40 minutes).

​
Brush with beaten egg yolk mixed with 1 tbsp. cold water.
Position oven rack about 5 inches from bottom of oven.
Preheat oven to 375 degrees and bake for 25-30 minutes or until golden brown and internal temperature is 190-195 degrees (instant read thermometer).
Remove immediately from pan and place on wire rack to cool.