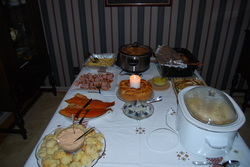 The supper on Holy Night
differs from other evening meals, having twelve Lenten dishes, symbolic of the
twelve Apostles who gathered at the Last Supper. The dishes are prepared with a
vegetable shortening or cooking oil, omitting all animal fat, milk and milk
products because Christmas is preceded by a period of fast which ends on
Christmas Day after midnight or morning church service. The day of the
Christmas  Eve is a strict fast in commemoration of the hardships endured by
Mother Mary en  route to Bethlehem.
The table, set to according to
time-honoured custom,  is first strewn with a small handful of fine hay in
memory of the Christ Child  in a manger, and over it is spread the very best
tablecloth adorned with native  embroidery. Bread (kalach), symbolizing
prosperity, constitutes the central  table decoration. Three round, braided
loaves are placed one on top of the other  with a candle inserted into the top
load, and the bottom loaf encircled with  tiny twigs of evergreen. Candles on
both sides of the loaves complete the table  decoration. If a member of the
familhy has died during the year, a place is set  for him in the believe that
the spirit of the deceased unites with the family on  that magic Holy Night. A
lighted candle is always placed in the window as an  invitation to any homeless
stranger, or perchance a lost soul, to join the  family in celebrating the birth
of Christ.


Prior to the evening meal a spoonful of each dish is mixed into the feed of
the domestic animals, because animals were the first creatures to behold the
new-born Christ. The first star in the eastern sky announces the time for the
commencement of the meal. It is the children’s duty to watch for the star. Each
member of the family, dressed in holiday attire, awaits the customary ritual
opening. This is done by the master of the household who brings a sheaf of what
called “did” or “didukh” (grandfather), a symbol of gathering of the clan, and
greets his family with traditional salutations, expressing joy that God has
favoured them with good health and general well-being. The sheaf is placed in
the corner of the dining room, and remains there until New Year when it is
taken  out and burned. In the cities this tradition has been modified, and the
sheaf is  replaced with a few stalks of wheat which are placed in a vase, or
they may be  used as a table decoration.


Members of the family and servants gather around the
table. The  meal begins with the Lord’s prayer and then a thanksgiving grace
appropriate to  the occasion. The first and indispensable dish is kutya, a
preparation of cooked  wheat dressed with honey, ground poppy seed, and
sometimes chopped nuts. This  ritual dish, of a very ancient origin, has
survived hundreds of generations  without losing its importance in the Christmas
festivity. it starts the meal in  a ceremonial manner. The head of the family
raises the first spoonful of the  kutya, invoking God’s grace, and greets the
family with the traditional  Christmas greet: “Khrystos Rodyvsya” (Christ is
born), to which they all reply  in unison: “Slavim Yoho!” (Let us glorify Him).
Following this ritual everyone  must partake of the kutya, if only but a
spoonful. The exact meaning of kutya  has been lost. However scholars of the
folklore generally believe that  originally it symbolized the spiritual clan
unity of all living and deceased  members. Agricultural prosperity may have been
a secondary symbol.
Kutya may be followed with an appetizer of pickled
herrings or pickled mushrooms, or with a serving of borsch, after which comes
one or more preparations of fish and various other traditional dishes, ending
with a dessert of stewed dried fruit, or fruit varenyky, and the Christmas
pastries and nuts. Everyone must have at least a small serving of each
dish.
After the solemn meal, the family joins in singing Christmas carols
and  general merry-making. There is no visiting on Christmas Eve with the
exception  of bringing Yuletide greetings and some of the supper dishes and
pastries to the  grandparents. It is strictly a family evening. There are many
beliefs and  superstitions connected with the Christmas Eve celebration which
are no longer  observed.
Soon after midnight or at early dawn, the family
attends a special  Christmas service enriched with beautiful choral music. In
the afternoon of the  Christmas Day, continuing late into the night and through
the following days,  organized groups of carolers visit homes, singing ancient
and modern carols,  bringing traditional Yuletide greetings, and soliciting
funds for worthly  causes.


Edit:Taras points out that the Holy  Supper should
really be transliterated as “Svyata Vecherya” (Свята Вечеря) as
well as “Slavimo Yoho” (Славімо Його), but  from what I’ve
noticed they are commonly made mistakes here in North America.